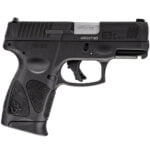 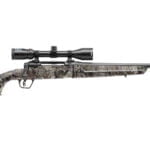 Yes, it's available and ready for pickup/shipment, but we only have 1 left in stock. Almost Gone!

Winchester Model 59 12GA Semi-Auto Shotgun 2 Chokes, Original Manual. Made between 1960-1965 and in great condition with a good action. Ready to take out and shoot.

“The basis of the Model 59 came from the Model 50, a shotgun designed using patents from Jonathan E. Browning (one of John Browning’s sons). The weapon was essentially a highly-modernized version of the Model 50 that came a few years prior.[1]

The Model 59 was introduced in 1959 and was first listed in Winchester’s catalog in 1960;[2] this was Winchester’s fourth semi-automatic shotgun offering.[3] Using an ingenious advertisement campaign touting the weapon’s benefits over its contemporaries, the Model 59’s use of modern technology for the time was extremely heavily advertised, the most prominent features of which were its aluminum receiver, lightweight Win-Lite barrels[4] and the Versalite interchangeable choke system.[5]

Despite its futuristic technology for the time, the Model 59 was not a commercial success,[1] with production ending in 1965 after some 82,085 were produced.[6]

Design Details
The Model 59 was a semi-automatic shotgun using a short recoil action. Unlike most other short recoil designs, the barrel on the Model 59 is completely static. Instead, the weapon uses a floating breech system consisting of a chamber and forcing cone patented by David Marshall Williams; when the weapon fires, this breech moves back about 0.1 inches (0.25 centimetres), causing the bolt to move backwards. A return spring pushes the bolt back forwards.[6]

The weapon uses special Win-Lite glass fiber barrels which are made of some 500 miles (800 kilometres) of glass fiber tubes wound around, fused and bonded to a thin steel liner.[2] The weapon’s receiver is made out of a lightweight aluminum and has hand-finished and hand-checkered walnut stocks.[6] The weapon also uses the Versalite interchangeable choke system and the side of the receiver is often engraved”