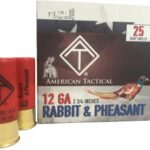 Yes, it's available and ready for pickup/shipment, but we only have 18 left in stock. Almost Gone!

The Barnaul Cartridge plant in Russia is one of the oldest Russian Small Arms manufacturing factories. Original established in Saint Petersburg in the 19th Century it was relocated to Podolsk in 1918 during the Russian civil war. Production was restarted under the “P” designation in 1920 then again re-designated as factory 17 in 1928. During World War II the factor was then relocated again to it’s current location in Barnaul in 1941 where it remains in operation to this day. The Barnaul factor manufactures many popular lines of ammunition including the Barnaul Rifle Cartridge line offered here. Pick up a box or two of this quality steel cased ammunition.